Let’s get started looking at Sinatra.

Make sure you have the Sinatra gem installed. Use gem list sinatra to check if it’s there. If it’s not install it using gem install sinatra.

Now, let’s steal the intro example from their homepage, and adopt it. Make a new directory sinatra, cd into it, create a file monstas.rb and add this code:

Now you can run your little app using ruby monstas.rb. You should see something like this:

Again, there are lots of version numbers, that we can ignore, and it also tells us the port that it’s running on. This time it’s 4567. For some reason Sinatra finds it important to use a different port number ¯\_(ツ)_/¯ 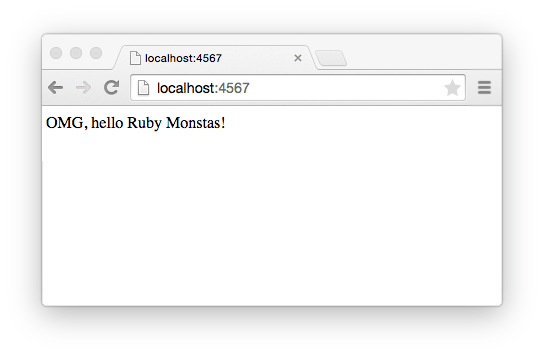 That was easy, wasn’t it.

If you’ve read the chapters about Rack it is interesting to know that Sinatra uses Rack under the hood, but it deals with the nitty gritty details of looking at the REQUEST_METHOD and REQUEST_PATH for you.

It allows you to use the methods get, post, put, and delete with a path argument, and simply specify a block that will be called whenever a request matches the request method (verb) and path.

The Ruby code that makes up our little Sinatra application reads very well, and it only focusses on the bits and pieces we care about (as opposed to our Rack application, which had to include the knowledge about the env etc.)

Sinatra also allows you to simply return a string from this block, which will then be used as the response body, and sets things like the status code and headers for you (when it returns the Rack style response array to Rack). Since the vast majority of requests will want to return 200 as a status code Sinatra just assumes you want that too, unless you specify something else.